You are here: Home / Book Reviews / 52 Weeks of Book Reviews. Week #34 – The Like Switch: An Ex-FBI Agent's Guide to Influencing, Attracting, and Winning People Over by Jack Schafer @jackschafer
Spread the love

I feel like I’ve just been let in on a giant top secret training for Mission Impossible. This guy has done the things that we watch on T.V 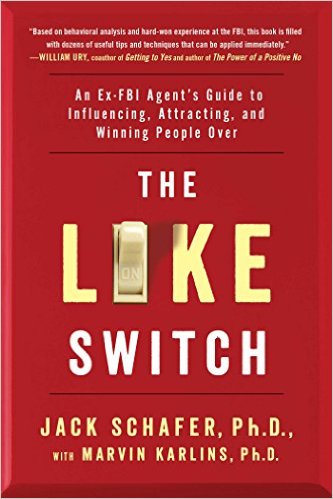 and even though I’m sure those actions aren’t nearly as glamorous as the television presents, It’s infinitely more interesting because it’s real.

52 Weeks of Book Reviews. Week #34 – The Like Switch: An Ex-FBI Agent’s Guide to Influencing, Attracting, and Winning People Over by Jack Schafer

So how does this apply to everyday life? There are so many applications, but think of this as “How to Win Friends and Influence People”, but from the perspective of someone who’s life actually depending on it. That’s a whole different level of ownership. I can’t imagine that I’d ever be in a situation like any of the ones described in the book, but I could use the techniques to make friends and gain trust in a more consistent manner. Some people will say that if you use tactics to make friends or to gain your way in business it’s unethical, disingenuine or manipulative. I guess all of these things could be true, but I always encourage you to use your powers of persuasion for good instead of evil. That sounds a bit grandiose, but seriously evil people are always persuasive. Hitler and Charles Manson were great salespeople, they just sold crap.

The book touches on several subjects which I’ve been interested in for some time. It touches on body language and micro expressions. The body language stuff all seems relatively straightforward but, I can only imagine that it’s a beast to remember to look for all of these tells and still keep up the conversation. The micro expressions are a bit trickier still. Mostly Jack talked about eyebrows and eyes but I’m wondering if you ever watched that show “Lie to me”? I think it had Tim Roth in it, but it was amazing. The science behind the show is mostly legitimate as well and focuses on microexpressions. The main character could read these micro expressions and tell you what you were thinking. I believe there is a new show coming out soon about a jury consultant who uses some of the same science. It seems like a modern-day Sherlock Holms to me. You can tell so much more from a conversation if you can just pay attention to all of it. The book also seems to touch on some NLP, the pseudo-science that basically talks about low-grade hypnosis and tricks your mind into responding a certain way. Like if I get you to say yes 4 times in a row and then ask you for a favor, you are likely to say yes again.

So here is the deal, I like the book. I found it immensely entertaining and I probably have 2 dozen things I need to practice so I don’t come off as snobby, peevish, condescending or cold. I’m a natural introvert and so I don’t like small talk and social gatherings in general. I probably rub people the wrong way too often and you know when you send an email and then think that you probably shouldn’t have because email doesn’t include things like tone and pace? Yeah, that happens to me in real life because I don’t naturally have tone or pace that matches what most people think it should. I’m responsible for not only the intent of the message but, also for the interpretation and I struggle with that often in person. Books like this help me and even if you aren’t socially awkward I bet this book would help you too. Everything in life is Sales, and people buy from people they Like. Flip the switch.