You are here: Home / Book Reviews / 52 Weeks of Book Reviews. Week #35 – Coaching Salespeople into Sales Champions: A Tactical Playbook for Managers and Executives by Keith Rosen @keithrosen
Spread the love

Effort X Skill = Success. Some coaches get by with a ton of blustery effort and massive enthusiasm. They get what they want to say out and often it’s a great feeling but it fades quickly and I need to get energized all over again. Keith isn’t that type of writer. I haven’t seen him speak or watched any 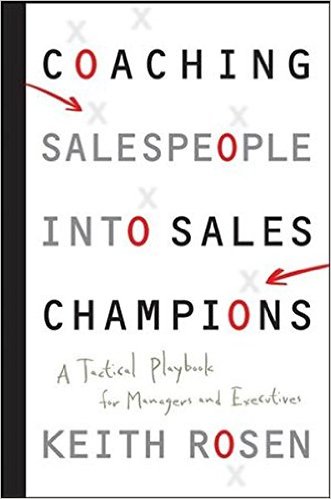 videos but his writing seems very skillful and I’m sure he’s passionate about what he does, but it’s the thoughtfulness and the well laid out plan that catches my attention.

This is a tactical playbook. It’s full of specific tactics and I think it’s fair to say that most of the tactics are straightforward and easy to understand. We aren’t talking about rocket science, brain surgery or a membership to mensa here. We are talking about execution. I don’t mind that Keith hammers home the fundamentals of his coaching and talks about asking the right questions and particular systems multiple times. I’m still of the mindset that repetition helps people to learn and even though we bought this book and want the information contained something like 72% of the knowledge gained is instantly lost. Retention of knowledge is fleeting when we read a book like this. It’s important to take notes and implement the tools right away.

I bought a hard copy of this book right after listening to the Audible version. I liked the Audible version but I need the hard copy to reference during the day. 1:1 coaching sessions fall into the category of Important but Non-Urgent activities that are easy to push off in favor of some reactive behavior. These same coaching sessions are the actions that will yield the highest results and also cause us to stretch the most as leaders.

Keith is a pro. You could literally throw out your current management playbook and substitute this for whatever you are doing now and if you actually did what he prescribes, you’d be an all star. It doesn’t take much to be a sales manager, but it takes an awful lot of grit, consistency and a willingness to actually coach in order to be a great sales manager.