You are here: Home / Sales Skills and Tips / The New 4 Letter Word in Sales = DEAL
Spread the love

Recently I’ve been seeing a lot of noise around the word “Deal”. I have no idea why some sales experts are designating this word as 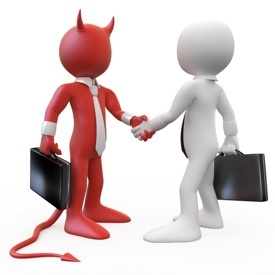 something to avoid, but i whole heartily disagree. I am happy to look someone in the eyes and ask them if we have a Deal. I’m happy to let someone know that this is a great Deal. As long as I am genuine and I really believe that I’ve put together a great Deal then I’m 100% good with this word.

The problem arises because some sales reps will talk about getting or giving “Deals” that aren’t really a good value. The customer can feel when something doesn’t feel right and that “Deal” suddenly turns into a Lemon. Customer’s still want a Deal, but the Deal has to mean Value. Every customer I’ve ever worked with wants to feel like they got the better end of the bargain. They want to feel like they negotiated and received a better Value because of their interaction and ability. The passive people believe they will get a good Deal because they are good people or because they are easier to work with. The friendly, outgoing people believe that only friends give friends the good Deals, so they want to make friends with you. The super busy executives want to get a great Deal from you because they are quick and to the point and save you time. My friends with the excel spread sheets that analyze the numbers from every aspect want to believe that their acute attention to the numbers has garnered them some magical leverage that enables them to get a better Deal.

Everyone wants a Deal, they just don’t want to feel slimy about it. They don’t want to be told that it’s a Deal, they want to judge it to be a good Value themselves. Go ahead and use the word, just back it up with Value, however the customer defines that Value. Some people value expediency, other want you to take your time. Some customers want you to be very personable, others want you to respect their privacy. The word isn’t the problem, it’s that sometimes the Deal isn’t really a Value. It’s up to sales people to find out what the customer finds valuable and then to tailor the program, purchase or service in the best way possible. Let’s put away the pitch forks and put the halo over Deal.